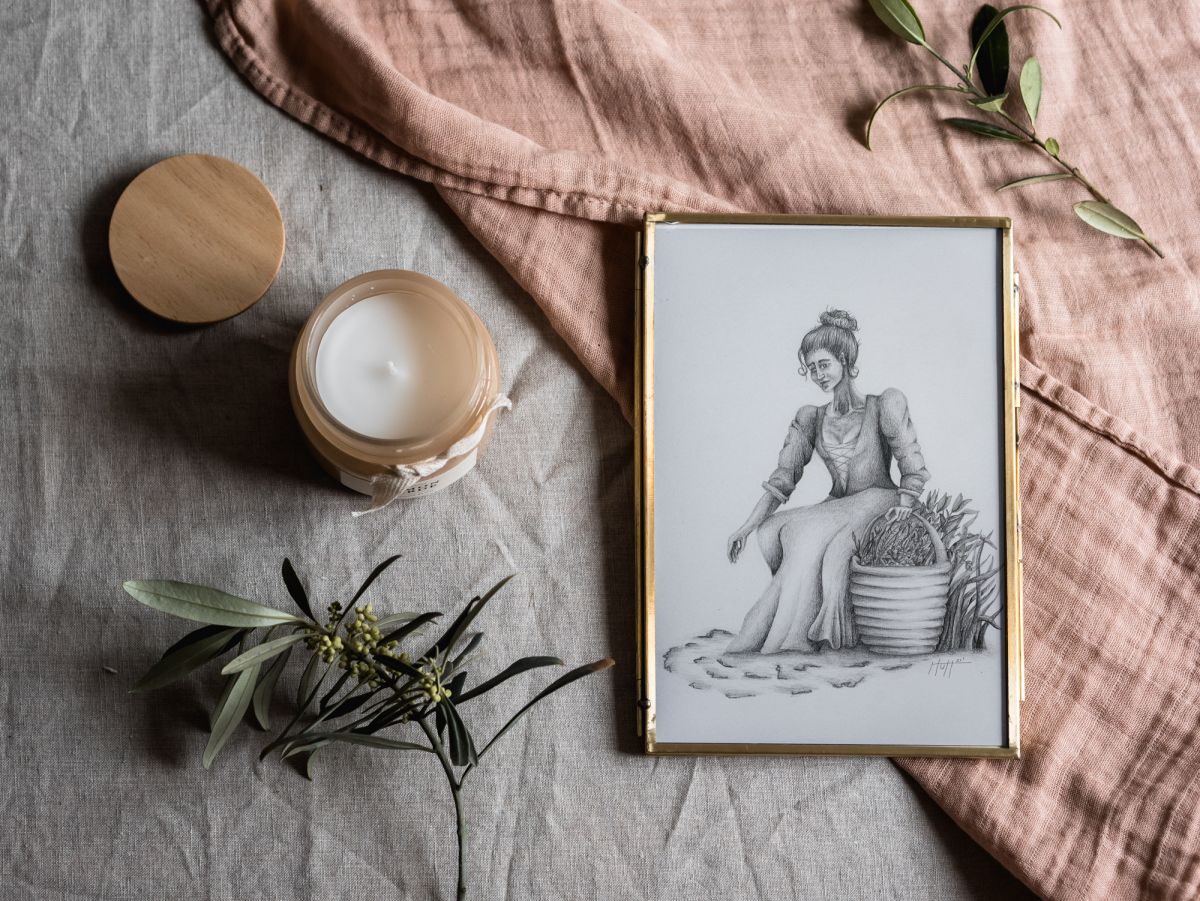 Behind The Silent Generations Collection

I saw it come to life as I listened to the Highwomen’s self-titled song for the 100th time. The stories of these women, unnamed and unknown, highlighting what they sacrificed for the world. How their lives made the lives of women to come better. It’s a story as old as time. What the marginalized have sacrificed in hopes of a better future. What women sacrifice in hopes of honoring themselves. To me, this song, this story, what the full representation of the divine feminine, and I wanted it to come to life.

As an artist I haven’t been able to choose just one medium to work in. I’ve gotten it down to 3-4 that I like the most but I don’t know that I’ll ever just specialize in a single medium. So when it came to this collection I had a choice to make. Would I choose a medium that threw color theory into the mix, something I could paint and layer and create a whole world around. Or would I go with graphite to create a calm nostalgic feeling.

I wanted this series to feel like a memory. The stories that are shared moving from the beginning of time to the future, cross space and time in a way that transcends trends. To me, black and white made it feel like a classic photo gallery at the turn of the century, holding onto lost memories, a second in time.

Pencil also gave me the chance to really dive into the detailed work of these pieces. While I can still get details in with gouache or even marker, it’s not quite the same level. Pencils, with their fine tips, really allow you to do fine work.

As an artist with an illustrative style, I also wanted the graphite to uplevel this series bringing it more on the platform of fine art vs. illustration. My style really walks the fine line between this in general. I never want my artwork to feel cartoony. Not that there’s anything wrong with that, it’s just not the way I see my art.

The original song that inspired this collection only told the story of 4-women. That didn’t feel like a complete collection to me and I knew there were so many different female stories that could still be told. So I started with the first for archetypes–The wise woman, the freedom rider, the preacher, and the refugee (the woman coming out of Honduras). And then I thought about all the things I’ve been told as a woman and the stories I’ve heard of other women.

I wanted the final product to be 12 images. Like the 12 disciples but of the Divine Feminine.

Growing up in the church I have a deep connection with the creation story, because I think it’s leaving out so much. I love reading different theologians’ understanding of it today because it’s always more complex and the 2-paragraphs the bible gave and the short understanding I was given in the church. It became important to me to share the story of eve, where it all began.

The other biblical figure I thought of was Mary. A teenager with child, out of wedlock. What fears did she have to endure? And then to live knowing that your son would eventually die in front of you. What pain did she endure? Her story, the story of a mother, felt profoundly important to me even if I don’t yet have children.

From there the stories grew. A Native American woman connected to the earth and the animals around her, a 1940’s explorer fighting against stereotypes and seeing the world, A student, an artist, an athlete, a pilot.

All of these women became deeply personal to me as I explored their stories and thought about how I would portray them–with dignity, with pride, with hope.

I’ll be honest when I say that it’s very recently I’ve started trying to depict people of other races. As an art student it wasn’t something that ever came up. And in so many cases I’m drawing myself (whether literally or figuratively.) Most artists I know only portray their own race. But when representing that Divine Feminine, it felt important that she didn’t look just like me. That’s been a problem with the portrayal of history already, and this collection was about shining a light on the truth.

To begin with, Eve is portrayed as a black woman. While every Christian kids book I read had her as a white woman, that would not have been true. Upon further research I found that scientists think that the Garden of Eden was actually in Africa (most likely Botswana) and therefore Eve would have been black, or in some way melanin-rich. So I portrayed her as a strong black woman connected to nature. The snake of the garden wrapped around her arm, a piece of her she now wears forever.

Mary is another figure often portrayed as white. Again, this wouldn’t even be close to the truth. Growing up in the middle east, a gypsy woman, Mary would have been middle eastern. She would have worn every piece of jewelry she owned to show her rank, and her worth. Where she stands in a small home, would have housed her entire family and been the space that Jesus grew up.

The woman from Honduras, the freedom rider, and the student are all clearly from minorities. And then there is the surfer and the pilot who’s background are a little less clear. They could be white, but they could also be black or Hawaiian or any number of other make-ups. In the end, the specifics don’t matter, because the Divine Feminine covers us all.

A year after starting this project, I would finally get the chance to share these stories. Each image was made with intention. With a story in mind and an archetype to depict. I wanted the art show to be just as intentional.

The space needed to be somewhere sacred but not associated with religion. Women have often not been welcome when it comes to religion and this was their time to shine, to talk, to share. So Ohana Yoga + Barre became the venue for this one night show. Transforming the studio space into an art gallery.

Lights dimmed, shoes off, and a playlist rooted in The Highwomen’s songs, and this show was ready to transport you.

At the back of the studio was a table lit with candles with an invitation to write down the names of past female loved ones. To honor our sisters of past generations and to welcome them into this space to heal through the divine too.

The series of images started with the four archetypes from the song and then moved into a line of women from the beginning of time to the future, ending with the artist. A somewhat self-portrait while also trying to remain open for anyone to see themselves.

The only two women in these paintings that were based off of someone specific were Eve and Mary, and even then, we don’t know what they looked like so she could still be any of us. The rest, while reference photos were used for posture or facial expressions, were not meant to represent specific people. As an archetype they portray all of us, and I wanted every woman to see themselves in these pieces. To know that the archetype’s story is her story. It’s all herstory.

In The Highwomen’s song there is a line that says “we are the sisters of the silent generations.” Our grandmothers, our mothers, even ourselves have been a part of this sisterhood. For sure each and every woman in this collection has been a part of that generation.

A moment in the middle of my art show, a woman came up to me in tears. Unable to speak she was weeping. She just walked right up to me to hug me. She understood. She knew the story and felt it within herself. As I looked over to her partner, he too was crying. Tears streamed down his face and I was so glad to know that he got it too. The divine feminine isn’t just female, it’s a part of all of us–Ubuntu, our liberty is bound together.

My hope with this collection is that in seeing the stories of the women before us, in understanding the divine feminine that lives through us, we can begin to break the silence and become the sisters of the divine–knowing our inherent worth, our power, and our connection to the divine, always.

Our French CAFE in Costa Rica