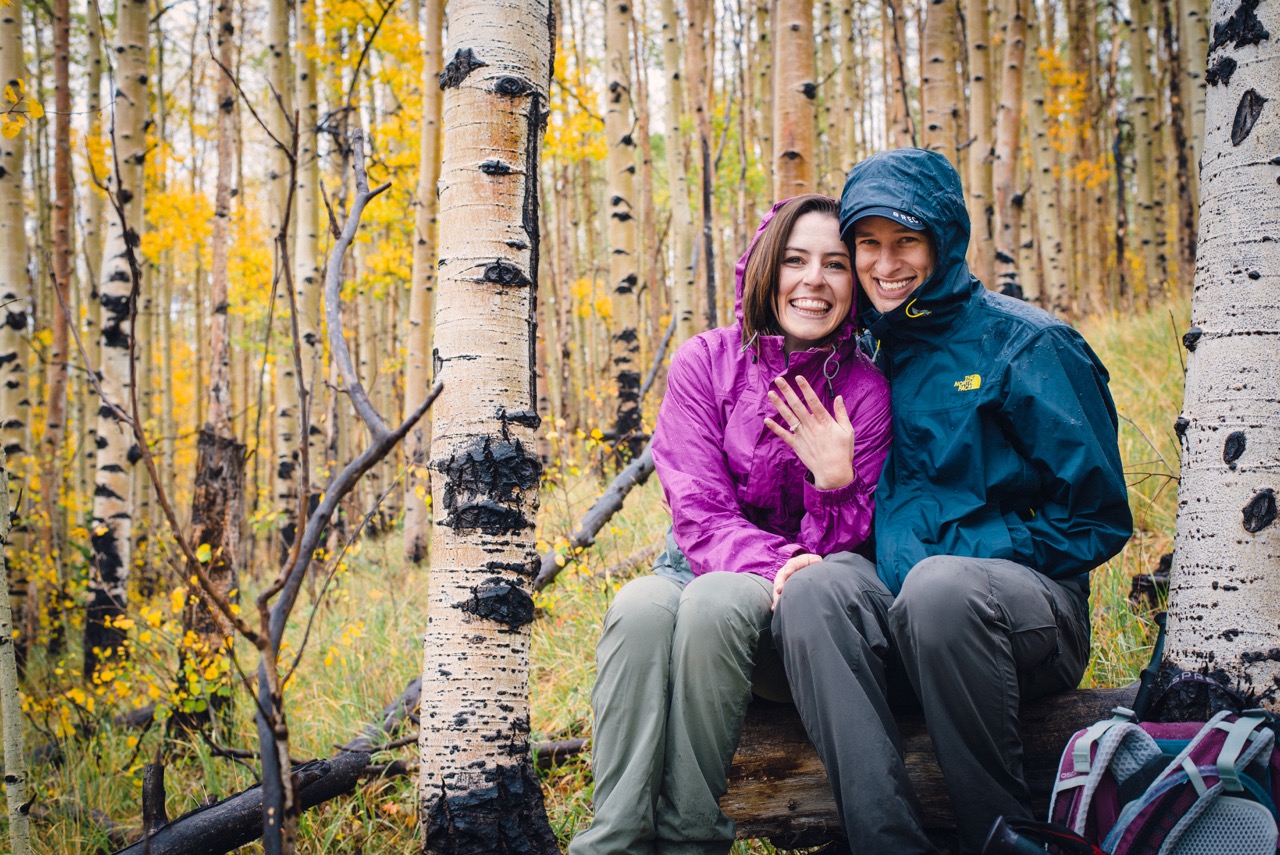 My Biggest Adventure Yet – Getting Engaged!

Clayton and I awoke to a rainy day, but we had vowed that we would go hiking rain or shine. In Colorado, the Fall only lasts 2-3 weeks and we didn’t want to miss the peak colors in the mountains. So as the clouds drew in and the air thickened with mist, we got ready to head to Kenosha Pass near South Park. Heading to our favorite bagel place down the street for fresh bagel breakfast sandwiches to eat along the drive.

For two hours we drove up the mountains watching as the leaves changed colors the higher in elevation we went. In parts of the drive, the clouds would break up letting the sun come through while other parts had clouds low to the ground kissing the feet of the hills. The views are always spectacular when you drive through the mountains, but driving into South Park is one of my favorites. And at this time of year, right before you drive into the large open valley of South Park, you’ll find Kenosha Pass, an Aspen forest that covers the mountains for miles.

When we pulled up to the trailhead we had no idea that there would be cars lining the road for miles. Apparently, we weren’t the only ones who thought it would be fun to brave the storm and have an adventure. It didn’t matter, people or no people, we wanted to be in this forest, soaking up the colors and enjoying the view. We hiked around for a while, following others along the trail, passing campsites and dogs begging for attention. We had made it a mile or so into the forest when we couldn’t take the crowds any longer and left the trail for our own adventure. Down in the golden forest, Clayton found some fallen trees to sit on with a view of the South Park valley – a large open space that spans for miles (at least an hour drive all the way through). As we sat there and ate our snacks and talked a bit the rain began to come down a little harder. Clayton crouched down to get something out of his bag and looked up at me. Telling me he loved me and wanted to spend the rest of his life with me he grabbed a sock out of his bag and dumped out a box. He opened the box to display the ring we had found together a few months back after looking at rings. A ring that looked like it should have come out of the 1920’s or as my sister describes it “if diamonds could look like lace, they would look like this”.

I said “Yes!” Like that was even a question. We sat there in the rain, now pouring harder than it had all day, and lived in this moment. A moment that was ours. We didn’t have a million people watching, or cameras going off, this was something only for the two of us. I did want to have a picture of the spot we were when it happened, so I grabbed a couple quick photos of the moments after and then enjoyed being in this spot. Sitting in the rain in my favorite season, surrounded by spectacular views, with the person I love more than anything in this world. A few minutes after he asked, the rain slowed down and the sun came out. The view of South Park cleared and you would have never known that was just raining. Judging by the clouds in the distance though, this wouldn’t last.

We hiked back to the car with smiles spreading from cheek to cheek. I couldn’t let go of his hand, I couldn’t stop looking at my finger. Everything about this moment was perfect. To celebrate and to attempt to get warm we headed to the Moose Caboose in South Park to get some warm drinks, dry off and revel in all that just happened. I even signed their guestbook commemorating this day and letting the world know that Clayton would be mine forever.

The drive back down the mountain flew by. Maybe because I was on the phone with my family the whole time celebrating, crying (mostly my sister-in-law) and talking about the future. Surprisingly, I didn’t call my mother after it happened. Instead, we showed up on my parent’s doorstep and rang the doorbell (something I never do). Through the door, you could hear my dad yell “Honey, they’re here!” – Obviously knowing that something was happening today. They opened the door to me, with my hand up showing off the ring. My mother shot through the door like she was on fire, hugging me and crying with me. We shared with them the story of how it all happened and then proceeded to get on the phone with all of Clayton’s family to let them know. Clayton’s dad’s response was one of my favorites. He simply said, “No kidding, it’s about time!”

My parents took us out for dinner to celebrate and drink champagne and then Clayton and I headed home to have the rest of the night to ourselves. Like the grown adults that we are, we decided to build a fort out of couch cushions next to the fire and watch a movie together while drinking wine. It was a day that represented us and our love so perfectly. Everything about this day makes me want to live it again and again. Even when we told my 90-year-old grandma the news, the next day. She had been asking for months when it would happen, so she was thrilled to know that we would have each other forever. (and mostly that Clayton would be a part of the family, she really does love him, but not as much as I do.) How To Show Off Your Photos